I recently signed up for a Channel Islands live-aboard photography trip and figured I’d better start brushing up on my stills photography. So I hijacked one of our weekend dives and decided to start with two wrecks in Lake Washington: a little runabout off the Dowell line and the Corsair. The plan was to enter at the end of Lee Street, spend about 30 minutes at the runabout, scoot north to spend another 20 minutes or so at the Corsair, then slowly scoot back to the entry to wrap up any remaining deco.

We had a group of four divers: I was shooting stills, Ben Shiner was playing dive model, JJ Crawford was shooting video and staging lights, and Josh Dailey was also shooting video. After the requisite chit-chat, we dragged all the gear into the water, completed pre-dive checks and surface scooted to the buoy. Descending the buoy line to about 80’, we then followed the Dowell line to around 140’ where we found the tagline heading north to the runabout. A short scoot up the line, and we were at the runabout.

We had planned to get a couple shots near the bow, so that’s where we started first. While the other guys placed lights, I ditched my scooter on the line and began getting the camera ready to shoot. I noticed Ben was using his video light to backlight the windshield, so I snapped a few frames before he headed up to the bow as planned.

Once Ben was ready to model, he hovered near the bow and used one of my Bigblue VL30000P video lights to illuminate the wreck. Combined with the other Bigblue placed behind the wreck, it did a great job of casting an eerie glow that brought the wreck to life. 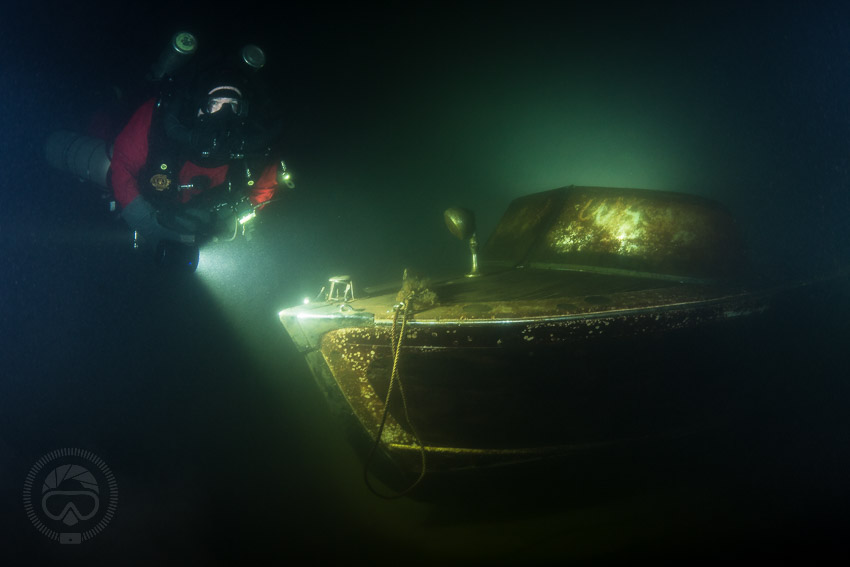 After bracketing about 20 shots, I moved just over the port side behind the dash, while Ben positioned himself just outside the wreck near the driver’s seat. Again, he used the Bigblue to light up the dash, really bringing the details out.

Satisfied with what we had captured, we packed up the lights, stowed the camera, retrieved the scooters and headed north. The Corsair is basically a rubble field, but the engine is fairly recognizable. We knew it was around 70-90 ffw, so I pointed the scooter northwest until 80’, then followed the contour for about 10 minutes until we started seeing piles of debris.

We quickly located the engine, and I again dumped the scooter and set up the camera. Having dived the site before, I wasn’t interested in shooting anything but the engine. I bracketed a few shots before getting Ben’s attention to come model next to it. 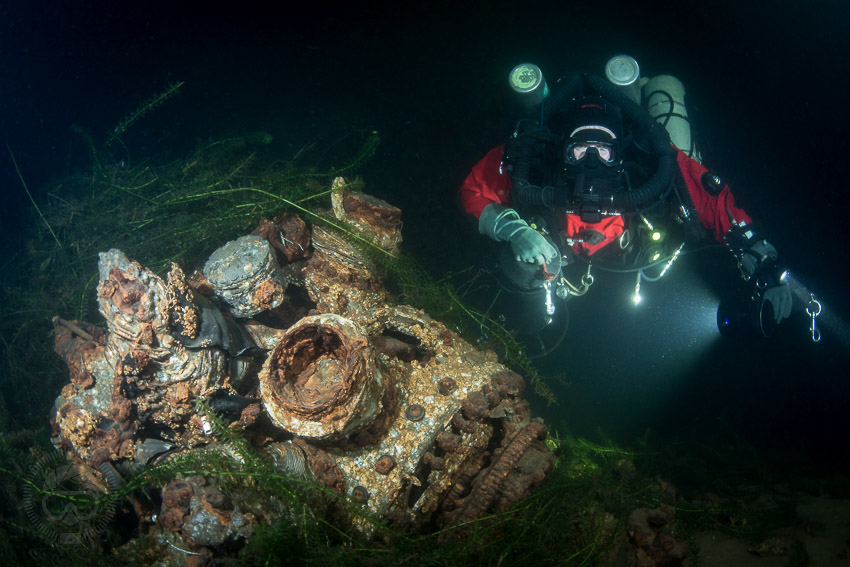 All in all, our plan was executed pretty smoothly, and I was very happy with the photos we ended up with.

The dark, silty conditions in the lake can make photography extremely challenging.  Here’s a quick video from JJ’s camera that better illustrates the conditions we were working with.